Why the Page Rank Toolbar has Little to do with Links

Everyone assumes that green line is all to do with backlinks. 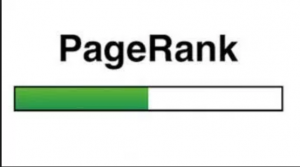 Seasoned SEOs have been trying to tell you for years to stop looking at that little green line on the Google Toolbar plugin. I only found out this morning that the toolbar has recently been updated, when Evilgreenmonkey twittered verbal abuse at realizing Jane Copland was Page Rank 5 from nowhere. First things first… congratulations Jane, but that’s certainly no disrespect to Rob, who (apart from being far too young) certainly knows his stuff! I admit that vanity then got the better of me and I looked at my own page rank. (Note to self – listen to your own advice… ignore that green line, at least for link purposes.)

So two at PR5 and one at PR4. Evilgreenmonkey must have the least links, yes? er… no. He has the most. He has ALWAYS had the most. Rob started actively blogging (it seems) back in April 2007. Compared to myself – latecomer – in September 2007. I’ve never caught him on links.

But WAIT… maybe is a bad measure? Maybe it is actually the number of referring domains that we should be looking at? Well I would be inclined to agree, but here, Rob trumps me even more:

Now Janecopland’s site is so new that I can’t even see her site in the Wayback archives and Majestic hasn’t gotten around to analyzing her backlink data yet, but Receptional’s own backlink tools take a more up to date source and we can see that she is even further behind Rob at the moment in every metric:

Heck – according to Google and Yahoo, Jane’s only got 11 pages indexed!

So there you have it. That PageRank green line is not all about links.

Let’s face it, you don’t need to go far to see why Google makes the distinction. Prior to Evilgreenmonkey posting on 4th April, his previous post on that domain was September 3rd (presumably 2008). Before that, July 4th. When he writes, Rob gets heard and plenty of people comment, but you still need to actually write content for Google to chew up and digest.

I think that Jane will have to work hard to maintain Google’s impression of her site, though. From the limited data I have, Compete.com concurs that Jane’s site has some traction – but we have seen time and again new sites doing well in Google for a short period and then retracting back as Google gets more data.

I hope that’s cleared things up a bit about that green fairy dust as Mike Grehan calls it.

I train people in Link Building Training if you would like to get involved.

No, it’s just because I’m a black hat.

I think the clue is in the tag line on your blog. “Part three, episode one…”.

Good article – It’s difficult to persuade people to ignore the green bar. Over time the green bar has become the end instead of a means… it used to be one of many indicators that an SEO campaign was heading in the right direction but now in some instances it’s actually become one of the starting objectives of seo campaigns.

Great Post Dixon,
Probably worth emphasising that PR did used to be all about the back links, and that as you point out the original Stanford Patent was am accurate representation of its use. I think the confusion amongst most web masters has come from this.
It also does not help that the PR green bar is still so actively pushed – the prevalence of its use probably compounds the misconception.

Thanks Peter. Yes – Google seems to have a way of being able to change the meaning of a word. This is extremely clever. The original “PageRank” was in deed all about links – but millions of lay-people see “PageRank” as that little green bar, and Google describes it as a view of “importance” and over a frighteningly short period of time, we all think “PageRank” is a number from 0 to 10.

More recently, they have hijacked the phrase “Website Optimisation” and legitimized the phrase by changing the meaning to analyzing conversion rates instead of search engine friendliness. Don’t get me wrong – Google’s “Website Optimizer” is a great tool, but it further darkens the murky waters of SEO by giving ambiguity to phrases banded around in the industry.

Thanks too, Steve. You must be younger than me. When I started this game, Inktomi and AltaVista were king. The green bar was some way off!

Nice one Dixon – I’m always a bit bemused about the obsession with PR. And, anyway, isn’t it the quality of the company you keep that’s important rather than the absolute number of ‘friends’? i.e. If EGM had a lot less links but they were all hugely authoritative, then he’d presumably have a much longer green bar than you 🙂
Nice to see a bit of friendly ‘green bar’ envy going on amongst you guys. Personally, nowadays I’m happy with a modest one as long as it makes money!
All the best 😉

Heh. We know how to spread the link love around Alan 🙂

But I would disagree with your conclusion that toolbar pagerank “isn’t about links”. All this proves, as Alan says above, is that it’s not about the raw *quantity* of links but more about their quality. I’ve seen Toolbar PageRank rising from 3 to 6 just (predominantly) off the back of 3 very authoritative links.

Btw where does majestic get its backlink data – does it have its own index or does it use Yahoo data?

The Majestic data is its own. I’ll be doing a bigger review of it in due course. The other data source used in the article is via Yahoo’s api.

Of course, a good quality link is a sign that a page is important to the world – and that eventually reflects in the green bar. I seem to have aggrevated a couple of people by liberally using adjectives to make the meaning a bit murky. Quality counts. Quantity doesn’t.

But I still feel that the green bar that users see is a long way from the PageRank that forms key main part f the algorithm. It is out of date compared to the true PageRank, for one thing, but more than this, other factors are also coming onto play in Google choosing your mark out of 10.

An example was when Google appeared to penalize sites apparently selling links a few years back. The (green bar) page ranks dropped, but from what I heard, traffic didn’t. So Google took a “view” and effective;y used the toolbar to send a warning message over the bow of sites.

Using Wordpress for SEO may not be the weapon you think if you use it with only half an eye on SEO.