Quick update on where I plan to be over the next few months.

Pubcon: 4th-7th December 2007 Las Vegas. I am moderating on a few sessions and also I am repeating the “Link Clinic” that got a bit of attention last year.

SES London: 19th-21st February 2008. I was down to do some training, but that seems to have gone by the by. I’ll still be there if Mike gives me a break! Mind you… the 21st is my 10th wedding anniversary, so I’ll be leaving promptly for the weekend!

SES New York: 17th-20th March 2008. Again, I’m hoping to be doing a training session and with a bit of luck a presentation. It’s always a long way to go without an engagement of some kind to woo the directors at Receptional with. But then Alan’s parties are to die for. 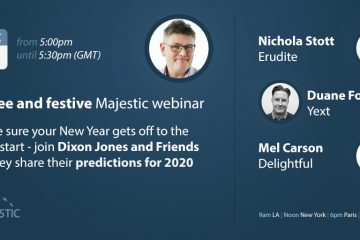